The Morning Glory was developed by JHS, the Pantheon is owned by Wampler, and the Snouse Black Box is almost an identical reproduction of the original circuit. The Tone City Blues Man and the Mooer Blues Crab are two less expensive producers that have attempted it and succeeded spectacularly.

Bluesbreaker pedal History, Where Dit It All Begin?

Although the first Marshall Blues Breaker pedal, an overdrive, debuted in 1991, the moniker has a 30-year history. The 1960s band the Bluesbreakers, with John Mayall and Eric Clapton, is where Marshall got his moniker. On their self-titled album, Clapton’s guitar tone, which was produced with only a Les Paul connected into a Marshall 212 JTM combo, is legendary. After the record, the amplifier’s circuit which was based on a Fender Bassman circuit, became known as the Bluesbreaker.

What Are Bluesbreaker pedal clones?

Like any successful circuit, pedal manufactures aim to recreate a piece of history buy adding their own twist to an already classic pedal. There are many Blues breaker clones on the market which are based around the original circuit and for the most part keep it simple by including a volume, drive and tone knob. On a few bluesbreaker clones, there are added functionality such as three band EQ and boosts to give additional options to the pedal.

Now we know the history of the Bluesbreaker, lets take a look at the best clones or similar style pedals that you can own today. Many Bluesbreaker style pedals have been made by the top guitar pedal manufactures so you can ensure that the quality is there. Whilst these pedals may not be identical to the original, they will carry many tonal similarities that will be noticeable when playing. 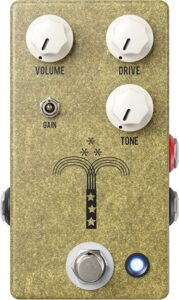 The Morning Glory has a very simple design: two knobs (Volume and Drive) and a three-way switch (Mode). The pedal can be powered by either a 9V battery or a 9V power adapter. The pedal is true bypass, so it won’t color your tone when it’s turned off. The sound of the Morning Glory is absolutely incredible. It has a very smooth overdrive that doesn’t sound harsh or muddy. 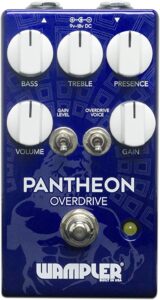 There are a lot of things that go into making a great overdrive pedal, and the Wampler Pantheon is no exception. This pedal has it all: great tone, versatility, and build quality. The first thing you’ll notice about the Pantheon is its excellent tone. It can go from a light overdrive to a full-on distortion, and everything in between. It’s also very responsive to your playing style, so you can get a huge range of sounds out of it.

The second thing you’ll notice is the Pantheon’s versatility. It has two different channels (normal and boosted), each with its own set of controls. This gives you a lot of options for shaping your sound. And if that’s not enough, there’s also a built-in boost function that can really help you push your sound to the next level.

There’s no question that the Analog Man Price Of Tone overdrive pedal is one of the best sounding overdrive pedals on the market. But what makes it worth the price tag?

For starters, the Price Of Tone is built with high quality components that give it a great tone. The pedal has a three-position switch that allows you to choose between two different clipping modes, which gives you a lot of control over your sound. The Price Of Tone also features a true bypass circuit, so your signal won’t be degraded when the pedal is turned off.

In addition to its great sound, the Price Of Tone is also built to last. The sturdy metal casing and high quality switches and jacks make this pedal withstand years of heavy use.

In conclusion, the best blues breaker pedal is the one that suits your playing style and preferences. There is no definitive answer as to which pedal is the best, but try out a few different pedals and see which one you like the sound of best. Experiment with different settings on each pedal to find the perfect sound for you.

Check out our buyers guide on the best overdrive pedals available to buy on todays market.

VISIT OUR GUIDE ON THE 10 BEST OVERDRIVE PEDALS

Here at Guitar Effects Pedals we also provide full reviews of the best online guitar services so you can learn guitar online.