In this Boss CE-2W Chorus review, we’re going to be discussing the pedals features, tone and performance to find out what makes this chorus pedal so highly regarded. 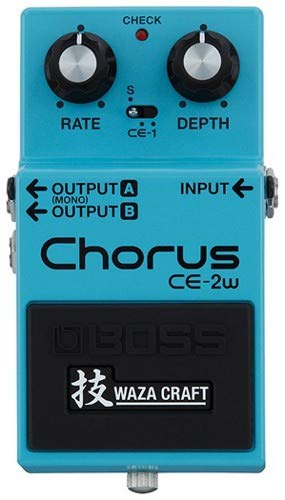 What happens when two great things combine? It leads to “waza” which means art in Japanese. The latest in the series of Boss’s premium line of guitar effect pedals is Boss CE-2W Chorus Waza. The modulated effects of the CE-1 model which is also the first model, were so good that it’s still known among the guitarists. The modulation effects of Boss CE-1 and CE-2 pedals are recreated in the new CE-2W model and the chorus effect of CE-2 is reproduced by the standard mode.

The most amazing thing is that you can switch between CE-2 sound and CE-1 vibrato effects by just flipping a switch. Also, this model imitates the chorus and vibrato effect from before and exceeds its predecessors in the respect of stereo output and variable depth. This allows
for precise adjustment of the effects.

The pedal is very versatile, it almost gives you the feeling that you could do anything with it. It so varied that it is like a Swiss army knife. Many functions placed in one so effectively. The analog liquid tone which is created by these pedals is very pristine. Boss adds additional voices that expands its value on stage or studio.

It has the same light blue paint as its predecessors. It is made up of premium analog circuitry complete with all bucket brigade delay chips which leads to authenticity of the sound. Despite it
being analog, it does not disturb guitar’s tone.

BBD (Analog bucket brigade) is the technology which helps in the premium modulation effects that it has and not digital modelling. It has a buffered bypass which feeds the same signal to the two outputs in case it is bypassed. The bypass switch is dead quite. It has a great chorus. It has pretty simple controls. The built is very good.

The minimalist 2 knob design enhances its grace. Like its predecessors it has a slider switch situated midst the knobs. It has three modes. The CE-1 mode takes its base from the original one and replicates those vibrato sounds. The chorus will also remind you of the original one. Left position (marked as “S”) is similar to the voice of CE-2. In the centre, it takes one more leap into the past, to the CE-2’S predecessors.

To the right, vibrato circuit is activated. It is as if you are getting the smooth CE-2 sounds in the left and CE-1’s definite swirl in the centre. While right is in its own right the king of full-on vibrato mode. It produces pitch-bending goodness. Switching to CE-2 mode leads to liquid transition. It does not change the tone drastically. Flicking over to CE-1 leads to deeper modulations.

The standard mode of CE-2W creates a very subtle effect. When used as a solo, the sound is very organic and when used in a multi-instrument mix, the depth control produces a subdued chorus. This happens in the first third of the ranges. In the next ranges it reveals more classical voices and at slower rates it leads to jazzy chords.

Lower rate settings and depth makes you feel that there is another alternative chorus with a tinge of pitch shifting. In the middle ranges, it feels more like a rotary speaker which is mechanically tinged. It also has a second 1/4-inch output jack that also handles the stereo chorus effects.

The rate and depth knobs work in all three pedal modes. CE-1 mode occupies the major portion, i.e.; one for the vibrato and other for the chorus. In all three modes, all effects remains dry except one output which is affected.

The pedal produces a very good sound of the originals with very less amount of noise. The number of rate’s and depth’s noise adjustments offered gives scope. The range of modulation effects takes you from phase-like chorus to fast warble. It is a well-executed and thought out design that ticks many musician’s boxes.

The low-to-extreme ranges of classic chorus tones amps its appeal. The vibrato modes can fulfil the needs of people who like to tweak the chorus. It produces the lushest effects known to mankind.

Boss really adds an energy to a tone overflowing with harmonics. So, in conclusion if one requires the elite of all chorus worlds, then look no further than CE-2w.

If you found this review on The Void Reverb both enjoyable and informative. Comment below your own review or any questions you may have regarding this product.

This pedal features on our complete guide of the best chorus pedals on the market today.