In this Boss CH-1 Super Chorus review, we’re going to be discussing the pedals features, tone and performance to find out what makes this chorus pedal so highly regarded. 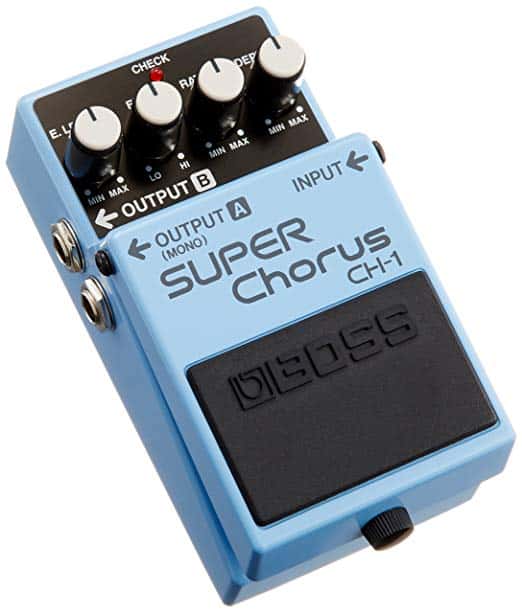 The seemingly light pedal makes a swirling sound that is heard in jazz, rock, country, and funk among other music genres. It has been featured in many hit songs since its inception in the late 1980s. The Boss CH-1 Super chorus has lived up to its name surviving for over 20 years.

– There is an optional AC adapter that is packed with the pedal when you purchase.

– The pedal has a clean, brilliant sound that has a combination of guitar and keyboard.

-It can be hooked to other effect pedals like flanger, wah effect, distortion pedal, and the tremolo effect.

– The Depth control knobs that enable a guitarist to control the intensity of the effect.

– The Boss CH-1 Super Chorus has a Rate control knob that limits the speed of modulation.

– It has dynamic components comprising of a mono input and stereo outputs that brings a magical Stereo sound. The two outputs allow the guitarist to tweak the sound to their desired stereo setup. This makes the guitar of keyboard sound organic, which is mostly seen in live concerts.

– The pedal has an input impedance of 1 Mohms and an output impedance of 9- 10 Kohms or even more than that. The sound that comes out at the output components to the amp(s) is amplified, thus making the guitar to have an energized tone.

– The pedal requires an input of DC 9 V and uses a Jack A /B adapter. The pedal comes in
handy with a pair of batteries which enables a guitarist to play without having to plug its adapter to an electric socket.

The Boss CH- 1 Super Chorus has a versatile tone ranging from high to clean sounds. When it’s hooked up to another distortion pedal, the sound improves tremendously. It’s used with other effects like flanger, the wah effect, and the tremolo effect. By adjusting the effect knobs, one can create a thick, murky sound or a sharp melodic sound.

The pedal has got few controls and can easily be set up even by newbie guitarists. It is also ideal for live shows due to the smooth, subtle chorus tone. The tone that is categorized as: a) Analogue version, b) Digital version.

The digital one tends to make a brighter and cleaner tone while the analog one has a warm murky sound.  This depends on one’s taste. You can connect the dual output on the pedal to the distortion on the amp to take the excitement a notch higher. The pedal can be connected to an acoustic guitar. The chorus sound made by the CH-1 Super Chorus is synonymous with the magical musical era of the 80’s and 90’s.

The pedal gives a guitarist the freedom to quickly shift from fast rate guitar riffs to slow tempo songs without having to adjust any effect knob. The CH- 1 Super Chorus has a price range of $90 – $120 which is very affordable considering the quality of the tone that the pedal produces.

The Boss CH-1 Super Chorus pedal has an average rating of 4.5* out of 5* – Check Reviews Here

This pedal features on our complete guide of the best chorus pedals for guitarists on the market today.