In this EarthQuaker Devices Avalanche Run review, we’re going to be discussing the pedals features, tone and performance to find out what makes this reverb pedal so highly regarded. 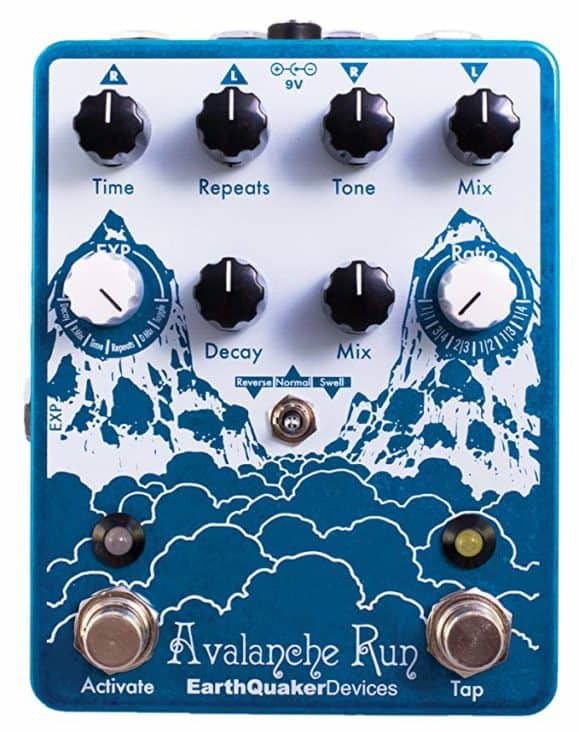 The Ohio-based company started not so long ago but it already became an important player on the pedal market, thanks to the products like this one. In this case, we are talking about two hugely popular guitar effects. Simply, it is hard to imagine a pedalboard without delay and reverb pedals these days.

This product packs two popular effects into a single housing. Moreover, I’m pretty sure that there aren’t too many pedals that offer such diversity of sounds or options for expansion. This is a true stereo pedal, which can be coupled with an expression pedal, or even used with other instruments, like keyboards.

Loads of features and options mean lots of knobs, but the EarthQuaker Devices Avalanche Run manages to remain super simple at the same time. Despite the quite complex design, this is definitely one of those pedals that will sound amazing whether you’re going to tweak the knobs for hours or just want to plug and play.

It instantly delivers spectacular tone quality, so it’s no wonder that many reviewers consider this product one of the most versatile delay and reverb pedals on the market.

The price is relatively high, but you’ll definitely get much more in return. Keep in mind that this pedal packs two effects with hi-end quality and offers tons of options for tweaking and expansion.

Typically for EarthQuaker Devices products, the Avalanche Run also has its own, unique look. In this case, it’s a nice combination of blue and white color but more importantly, the housing is rock-solid and will last for ages.

As we are talking about a pedal that packs two effects, it’s no wonder that there are numerous controls on the board. Still, the design of this stompbox is so good that you can count on perfect transparency and easiness of use.

Obviously, there are two rows of knobs, but the first thing you’ll probably notice is a toggle switch that is positioned below the knobs. It allows you to switch between Normal, Reverb and Swell modes. So, you can choose between normal and reverse delay and reverb, but also use a highly interesting volume swell mode.

When it comes to knobs, the top row is reserved for delay controls. There, you will find typical controls like Time, Repeats, Tone and Mix. Typically for reverb, things are much simpler. There are just two controls – Decay and Mix. Two more knobs are in this row, and I’ll talk about them in a moment.

The EarthQuaker Devices Avalanche Run features plenty of controls but that’s not the only thing we like about it. There are also numerous inputs and outputs. As we’ve already mentioned, this pedal features a true stereo delay and reverb effects. Therefore, you will find two Ins and Outs but that’s not all. This pedal is also expansive so there is one more jack, as well as an additional footswitch, for the expression pedal and tap delay function, respectively.

Now we are coming back to the knob section again. Besides the jack and footswitch, the pedal also features two highly transparent knobs that are bigger and in different colors compared to reverb and delay controls. They are positioned on the bottom row, along with reverb controls, on each side.

From the left side, you can see the Exp knob, which is obviously an expression pedal assignment knob. On the right side, there is a Delay Ratio switch, which allows you to select delay subdivisions when using the tap tempo footswitch.

Finally, a few words about the power supply. A good thing to know is that 9V DC is included in this case, so you won’t have to buy it separately. The manufacturer did this probably because of the fact that pedal requires a little bit higher than average power usage, which goes around 425mA.

The range of sounds that this small pedal offers is absolutely amazing. There are a number of reverb/delay pedals on the market but it’s a rare case to find such a cohesive fusion of two effects, which is an excellent tool that will help express all the creativity you have.

This is primarily an ambient delay and reverb pedal, perfect if you need to add all kinds of soundscapes to sounds of post-rock, indie, electronics and similar music genres. 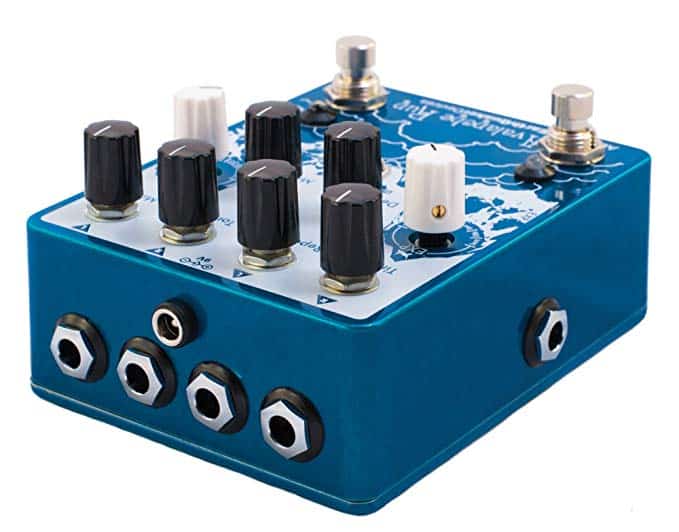 Of course, you definitely can use this pedal for straightforward delay and reverb effects as well. The delay is crystal clear and bright, which is exactly what most guitarists want. Moreover, the tone is quite fat, which isn’t the case with most digital delays.

In my opinion, reverb is even better. This is the second generation of the pedal and reverb gets a completely new mapping. The original one sounds great, this one sounds even better. It is quite simple and finding the tone you want will be super easy. Still, a variety of tones is great, as you can get all kinds of reverbs, including cave-like tones.

Using this pedal in a more traditional way definitely won’t disappoint you, but reverse and swell modes are where this stompbox really shines. This is where you get a lot of fun and where the pedal becomes a perfect source of inspiration. The swell mode is particularly interesting and you can easily get into those trippy dub effects. It can serve as a great alternative to volume pedal swells to some point.

The pedal becomes super versatile and functional once you connect it with an expression pedal. It allows you to manually control one of the six functions that can be assigned with an expression knob. Those would be reverb decay, reverb mix, delay time, delay repeats, delay mix, or toggling between forward and reverse delay.

All in all, this is an outstanding pedal, a real piece of equipment for professionals. All I can say is that the EarthQuaker Devices Avalanche Run is an amazing fusion of two effects, which offers an impressive range of textures. Moreover, it does that in a pretty stylish way. Not only that you can count on great diversity, but the tone quality is impressive as well. The tone is clean and noise-free, but also fat and rich. That’s something you won’t get from many delay/reverb pedals, especially not in this price range.

If you found this review on the Avalanche Run both enjoyable and informative. Comment below your own review or any questions you may have regarding this product.

This pedal features on our complete guide of the best reverb pedals on the market today.