In this EarthQuaker Devices Hoof review, we’re going to be discussing the pedals features, tone and performance to find out what makes this fuzz pedal so highly regarded. 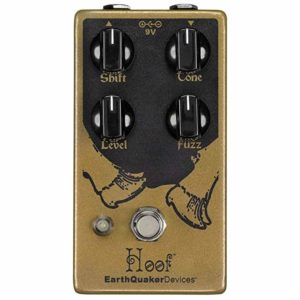 There’s no such thing as middle ground with fuzz pedals. You either fall in love with them, or you start to hate them at once. If you belong to the first group, you already know what to expect from such pedals. The fuzz sound has been shaped decades ago.

Not many things have changed since Hendrix and his mind-blowing Fuzzface tones. Practically, there is a couple of iconic pedals that represent different fuzz philosophies. The two most famous fuzz pedals are the aforementioned Fuzzface and the Big Muff. Some of the pedals that came after stand in the middle, taking a little bit from both worlds. However, a vast majority of pedals are nothing more than clones of two legendary stompboxes.

The EarthQuaker Devices Hoof is no exception. It delivers a tone that is heavily influenced by the legendary Big Muff pedal. However, it performs in such amazing way that many guitar players around the world have already replaced the original unit with this one. The reason lays not just in the amazing tone, but also in the fact that this pedal goes a little bit beyond the tonal range of the legendary Electro-Harmonix’s unit.

Also, guitarists love the fact that the pedal is simple and that you can dial great tones with ease.

The first thing you’ll notice about this pedal is its compact size. Unlike most fuzz pedals that are bulky and sometimes complicated to use, the EarthQuaker Devices Hoof keeps things super-simple. First of all, the pedal is so small that will fit any pedalboard with ease. The housing is built like a tank, while controls are super simple.

Before I start with controls, let’s say a couple of words about the design. The pedal features a pretty familiar circuit design but the interesting thing is that the manufacturer uses a fancy combination of materials for circuits and transistors. There is a combination of germanium and silicon, which ensures a perfect balance between fuzz and overdriven amp tones. That’s the reason why this pedal offers such amazing range of colors and why it works great with so many amps.

Fuzz pedals usually don’t feature too many knobs and controls. This one is no exception. You will find just four knobs on it and most of them are pretty familiar to everyone who has little experience with fuzz pedals

On the left, you can find Tone and Level knobs, things that are present on pretty much every pedal around, no matter the effect. Of course, the tone knob lets you find the most appropriate balance between bass and treble tones, in accordance with your preferences. As you may presume, Level is nothing more than pedal’s volume knob.

Things are far more interesting on the right side. First of all, there is the Fuzz knob, which allows you to dial the level of saturation. Also, there is the Shift knob, which is probably the best feature of this pedal. This is the thing that makes the pedal so versatile. To say in simple words, this knob allows you to boost certain frequencies, primarily mid-range tones. Combined with Fuzz knob, it lets you go through an extremely wide range of tones.

Below these four knobs, you will find a typical bypass switch, which is extremely quiet and allows noiseless switching. Of course, it is a true bypass, as we are talking about a genuine analog pedal.

I’ve mentioned so many times that this is a very simple pedal. Therefore, the backside features nothing more than one input and one output. The pedal runs on a 9V power supply, which is not included in the price.

We have finally come to the most important aspect of this pedal. With good fuzz pedals, it’s all about sound quality but the EarthQuaker Devices Hoof is also pretty versatile, untypically versatile for a fuzz pedal. Fuzz pedals that tend to offer a wide tonal range usually compromise the tone quality. That’s not the case with this one. Moreover, the overall tone quality is top-notch and I’m sure this is one of the best-sounding fuzz pedals you can find today.

In the spectrum of fuzz tones, the EarthQuaker Devices Hoof is very close to the legendary Big Muff pedal. Moreover, it features pretty much the same circuit, so you may count on a typical kind of saturation. Still, this stompbox has a couple of aces up its sleeve. 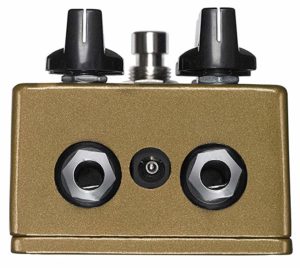 Even if you don’t like to bother with knob tweaking too much, you may count on excellent tones. Still, it would be a real shame not to use these amazingly-responsive knobs more. Those three typical knobs (Tone, Level and Fuzz) do the job great and guitar players particularly like the sensitivity of the Fuzz knob. However, the Shift knob definitely steals the show.

After just a couple of minutes of playing with Shift and Fuzz knobs, you will realize that this pedal offers an impressive range of tones. Not only that you can count on all kinds of fuzz colors, but you can also get the sound where tones aren’t clipped that much, but rather walk on a fine line between fuzz and distortion. In practice, this means that you can get pretty good clarity even at higher fuzz levels, which sounds perfect for soloing and lead tones in general. This particularly sounds great on Strats and other guitars with single coils, though humbuckers sound amazing as well.

To summarize, tones that you can get with EarthQuaker Devices Hoof will cover pretty much everything that has something to do with good-old fuzz-rock tones, and goes a little bit beyond. It is a great unit for a wide range of styles, from Hendrix to various metal genres.

So, if you need a top-notch fuzz pedal that covers a tonal range of the legendary Big Muff and goes even a little bit beyond that, you will hardly find a better pedal than EarthQuaker Devices Hoof. This is arguably one of the best fuzz pedals on the market. It sounds impressive, it is compact, easy to use and extremely durable. Moreover, it is handmade, while the manufacturer gives a lifetime guarantee.

If you found this EarthQuaker Devices Hoof review both enjoyable and informative. Comment below your own review or any questions you may have regarding this product.