The following article is a Electro Harmonix Canyon Delay review discussing the features and performance of a very popular delay pedal. 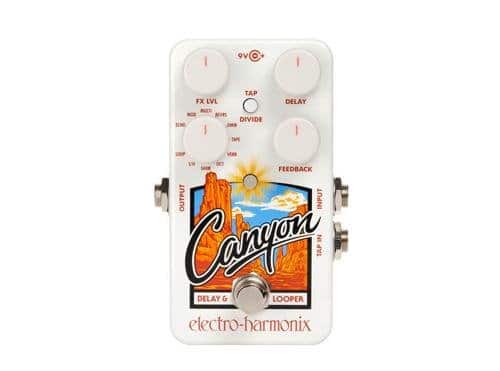 To increase the range of music they are creating many non professional guitarists are interested in purchasing an inexpensive stomp box. Though Electro Harmonix has released newer versions of its stompboxes, one of the most affordable and versatile stompboxes available is the Canyon Delay and Looper Pedal from Electro Harmonix This Electro Harmonix Canyon Delay Review provides an overview of the various features and controls of the delay pedal including design, settings, ease of use, and how it compares with delay pedals from other brands.

Like other pedals of the same price range, the Canyon pedal has four main knobs which can be adjusted. The FX level, delay duration and feedback knob can be used to control the levels continuously. The Delay mode knob has eleven different settings for the different types of delays ranging from Echo to Looper which are discussed separately.

There is a tap tempo knob with tap divisions which can be adjusted using external or internal dip switches. The pedal requires a 9 Volt DC power supply, and an AC adapter is provided along with pedal, so that it can be connected to the power supply. The pedal has one audio input and one audio output.

The first button on the top side of the board is the FX level button which controls the level of the wet signal and the dry signal. The next button sets the Delay duration, which can be varied from 3 milliseconds to three seconds. The Feedback button will be used to adjust the number of times the delay will be repeated it can be repeated only once to infinite number of times. The tap division knob is smaller and has three different options, with the quarter notes corresponding to no tap division, green corresponding to 8th notes, and orange for dotted eighth notes.

There are nine different delay types , one sample and hold, one looper setting. Echo is the first delay type in which the dry signal will repeat continuously at a lower volume, each time, till it will fade away. The modulation setting is similar to the Echo delay, with some modulation added, to make the repeats more complex.The multi tap delay is used along with the feedback button, and each repeat of the delay has a sound volume which is exactly the same as the original delay. The number of repeats is controlled using the feedback button.

The Reverse or Reverse delay has the repeats played in the reverse manner. However it also includes some amount of adjustment of the delay so that it suit the playing style the guitarist. DMM is the abbreviation for Deluxe Memory Man, which can be used to tweak the sounds so that it will be well modulated, and pleasant to hear.

The tape delay is similar to the tape delays which were popular in the 1970’s. For this delay there the echoes are distorting as they degrade creating a flutter. The verb mode includes reverb with a delay, and the each repeat has a reverb plate. If there is no feedback, it can be used as reverb only.

The Octave delay includes a Pitch Fork and POG, and can be used to adjust octave levels. If the feedback and delay are reduced, it can be used as an octave generator.The Shimmer delay, has octave shifted harmonies, which are produced by simulating a chain of four Electro Harmonix pedals connected together.

The sample and hold feature can be used to sample certain sounds which are to be used at a later date. In the looper mode, the Canyon can be used as a looper pedal, and can store loops of duration up to 62 seconds. The loop is stored permanently even when the pedal is switched off.

The canyon pedal is white in color, with white knobs, so it is easy to use and locate. Users of the canyon pedal are extremely happy with some of the features of the pedal like the Octave, DMM, Shimmer and sample and hold which allows them to create a wide range of sound effects quickly and conveniently.

Since it is an inexpensive pedal it does not have a provision for stereo input. The remote tap feature is also useful for guitarist who are handling a wide range of music equipment. Hence based on the price and features, the Canyon pedal from Electro Harmonix is a very good deal.

If you found this review on The Electro Harmonix Canyon both enjoyable and informative. Comment below your own review or any questions you may have regarding this product.