The following article is a JHS Muffuletta review discussing the features and performance of a very popular fuzz pedal. 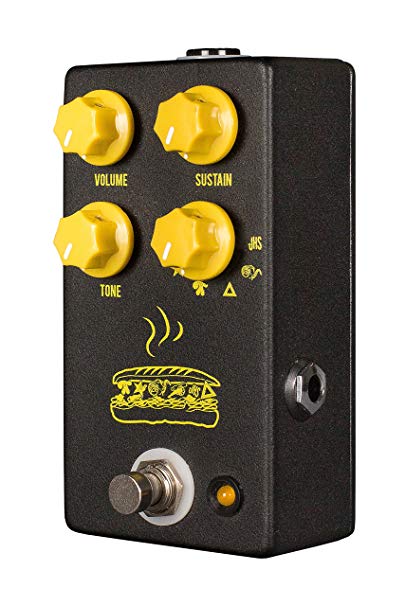 Mike Matthews and Electro-Harmonix are pioneers of electric guitar effects. For full five decades of existence, this company released dozens of iconic pedals. All of them are amazing, but Big Muff somehow stands out, as one of the most legendary fuzz pedals of all time. For decades of production, we have seen various versions of this pedal, with small but very important tweaks to the pedal’s circle, which shaped some of the most iconic tones of the fuzz effect.

The beauty of JHS Muffuletta is that it packs a whole batch of iconic Big Muff pedals into a single housing. This is the company’s way to pay a tribute to the legendary fuzz pedal. Engineers from this company packed five legendary circuits but there is also one more, JHS circuit, which represents a modern approach to fuzz sound.

Given the amount of tones, we may say that this product is one of a kind in the world of fuzz effects. The most impressive thing is the fact that we are not talking about some digital emulation, but a fully analog pedal with the same circuits as original units. Also, designers managed to pack all these tones into one pretty compact stompbox, which is also super-easy to use, as you will find the same knobs as on all Big Muff pedals.

The first thing you’ll notice about this pedal is how compact it is. It seems unbelievable to see six analog pedals packed into something that measures 1.6” x 2.2” x 4.8” (4cm x 5.6cm x 12.2cm). The pedal is also pretty sturdy and I particularly like the color and those simple but great-looking symbols.

Besides compact dimensions, the JHS Muffuletta is also very simple and easy to use. There are just four knobs. Three of them are the same ones you will find on every Big Muff pedal. On the left side, you will find Volume, so you can set up the level, and Tone knob, so you can easily find your perfect EQ settings.

On the right side, you will find a Sustain knob. Those who are familiar with Big Muff pedals know very well that this is actually a knob that lets you set the level of fuzz. The only difference compared to original pedals is the fourth knob, which allows you to select the fuzz type you want.

There are six fuzz types you can choose – The Civil War, The Russian, The Pi, The Triangle, ’73 Ram Head and JHS 2015. The last one is the company’s take on the legendary pedal.

Here is another thing I need to mention. Big Muff lovers know very well that the tone knob has always been one of the weakest points of original units. In most original pedals it wasn’t quite usable in the whole range. Engineers from JHS realized that the tone knob in the Russian Black Box Big Muff works best, so they incorporated it in all modes. A good thing to know is that this doesn’t affect the tone of each mode at all, so you may count on original sounds in all five positions.

The rest of the pedal comes in a pretty typical manner. Single Input and Output are on opposite sides, while the pedal runs on a common 9V DC adaptor, which is sold separately.

We finally came to the most important part of this review. First of all, this is probably the most versatile fuzz pedal you can find around. The five legendary pedals have been packed in this one and all of the sound impressive. The sixth one is the company’s take on the legendary circuits.

I will start on the far right. There you can find the JHS 2015 mode, which is a modern approach to the fuzz effect. Compared to most vintage fuzz pedals, this one doesn’t lack mid-ranges. This is particularly great for live performances, in loud bands where you have to deal with drums and bass. Also, the tone feels less compressed and offers pretty amazing dynamics. Moreover, it sounds good on a bass guitar as well.

The next one is the ’73 Ram Head model. This mode features probably the smallest amount of gain of all modes. Also, it sounds darker than other modes, with scooped mids. Play with knobs for a little and you will easily get those legendary Gilmour tones. Also, I really like how it sounds in a combination with a Tube Screamer, where you can easily get those amazing violin-like lead tones. 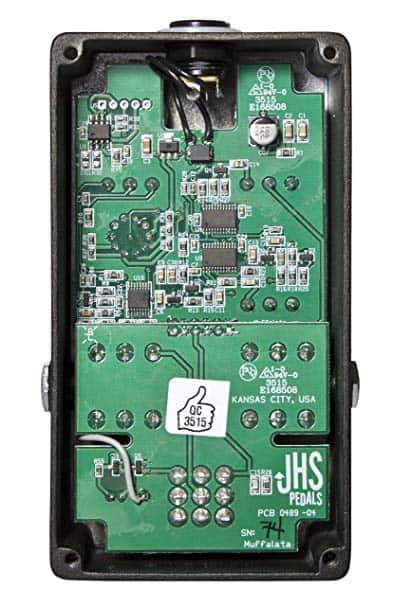 The Triangle mode has plenty of low ends but also sounds quite articulated. This pedal has been used by a wide range of artists, so you can get a pretty wide range of tones as well, from Santana to My Bloody Valentine.

The next model is the clone of the legendary ’77 Pi pedal. If you’re familiar with this one, you know that this is probably the most aggressive Big Muff pedal we’ve seen. Of course, the first artist that comes to mind is Frank Zappa, as well as Billy Corgan from Smashing Pumpkins.

The Russian Black Box mode is where things start to become really nasty. The famous Sovtek unit is characterized by a less low end and less clarity. This one sounds great with hollow-body guitars, but I found it works best with Strats, where you can get amazing lead tones. With a little bit of knobs playing, you can even get something that gets pretty close to the inimitable Eric Gales.

Finally, there is the Civil War mode, which is much more articulated compared to Sovtek and Pi fuzz pedals. Moreover, it also delivers plenty of mids and it is generally very bright. If you’ve listened to Pink Floyd Pulse live album, that’s how the Civil War sounds.

All in all, the JHS Muffuletta is an impressive piece of gear. It packs the essential Big Muff tones in a single unit and, what’s more important, it sounds amazing. You will hardly find something that is so versatile but isn’t a cheap-sounding digital emulator. This is a genuine analog pedal, something that every fuzz lover should have on his pedalboard.

You won’t get such a wide range of amazing fuzz tones anywhere else. Couple it with a good overdrive pedal and sky is the limit. Finally, consider that you get six pedals for the price of two original Big Muff units. That goes way beyond something we could call a fair price. A totally recommended pedal!

JHS Muffuletta fuzz pedal has a rating of 4.5* out of 5* on Amazon – >>>Check out the Latest Amazon Customer Reviews of the JHS Muffuletta<<<

If you found this JHS Muffuletta review both enjoyable and informative. Comment below your own review or any questions you may have regarding this product.